I get the awesome emails from Ruche and find myself inspired to do crazy things like put a few pieces together that don't seem to go at all and then carry it all off with fashionista attitude.  It almost seems like that's what makes style; it's easy enough to match things up and pair a bottom with a top, but figuring out what goes and adding more to the mix takes some time and talent...

Yesterday I had some girl time with my fave 2-year-old and spent some of it playing dress-up based on Ruche's feature on fall layering.  Here is how it translated to my VV Boutique wardrobe.

I like the layers and cropped pants and everything about this look right down to the mustard purse.  Here was my first attempt focusing on the floral print... 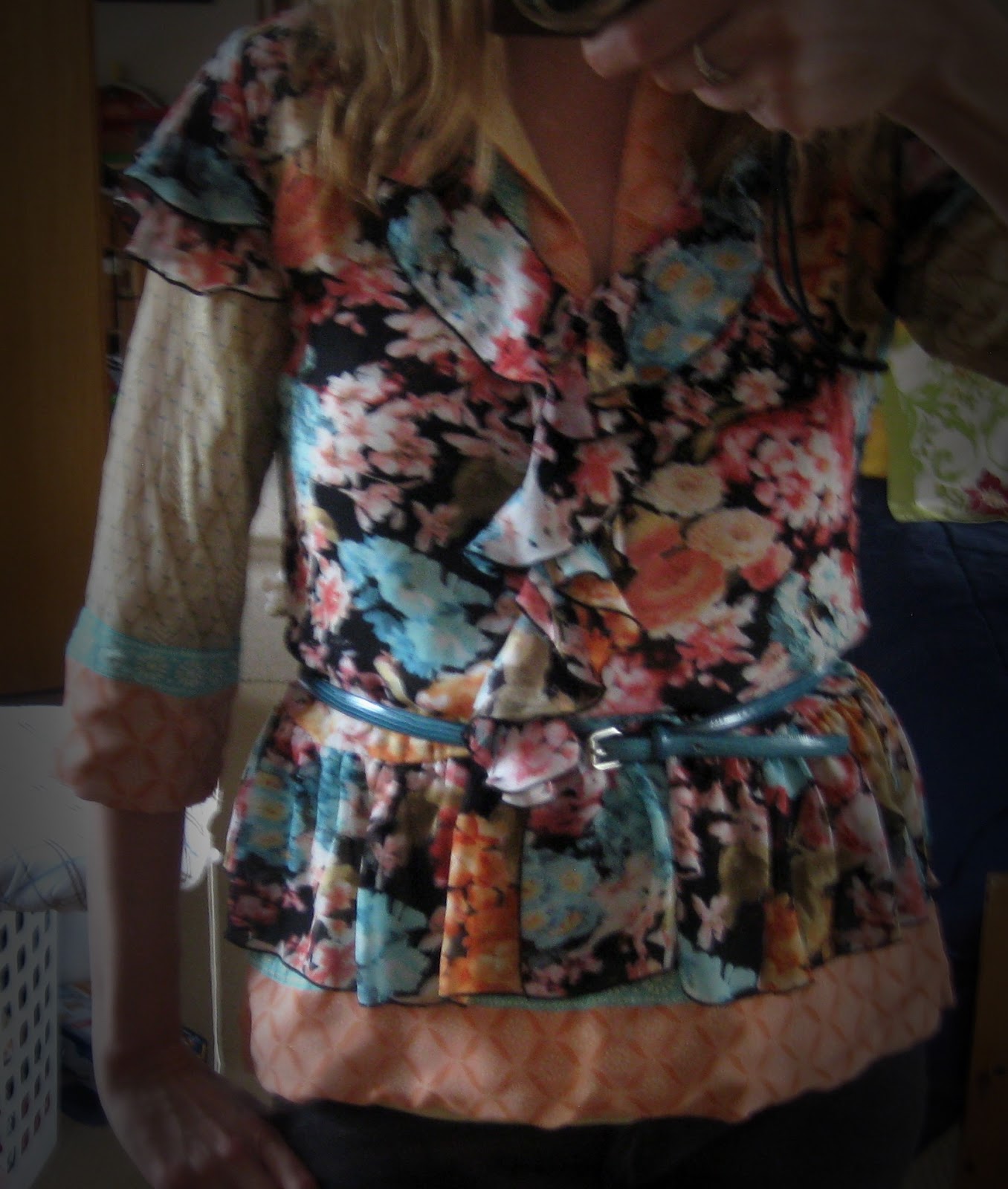 Although I never would have thought to layer these two tops without Ruche, I wouldn't exactly say it works.  So I took a second look at the inspiration photo and noted the "ingredients:" Peter Pan collar under a high neckline second layer + cropped pants + belt in coordinating colour + bangles.  I only have one piece with a Peter Pan collar and nothing sleeveless with a high neckline besides my elephant print top and that did not work, take my word for it.  I wanted a short sleeve to let the pattern of the bottom layer have more presence, and finally stumbled upon... 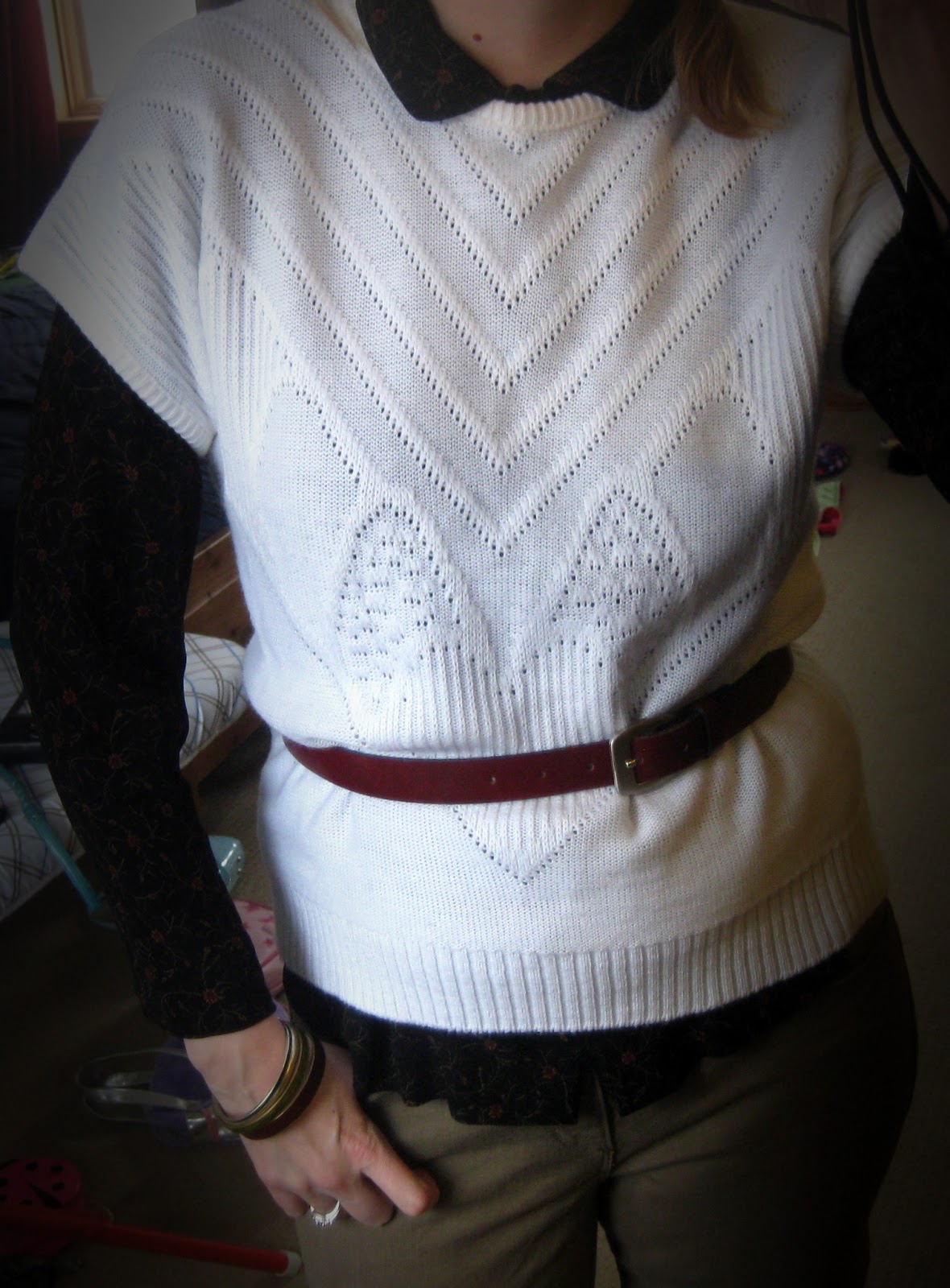 I have worn this Jones New York blouse before with my orange pants, though I didn't snap a photo.  It was $5, one of my treasures from the Hope Missions Bargain Shoppe.  These are my skinny cargos + plus bangles + white heart sweater.  Again I wouldn't have thought to pair these pieces but I like the retro-vibe result.  Doing something wild and crazy like putting a belt around the sweater is the unexpected touch that adds style, I think.

I was already wising up by this point and breaking the outfit down before trying to recreate it.  This look features a dress + belt + 2 outer layers + statement necklace.  Here's my take with what I have in my closet: 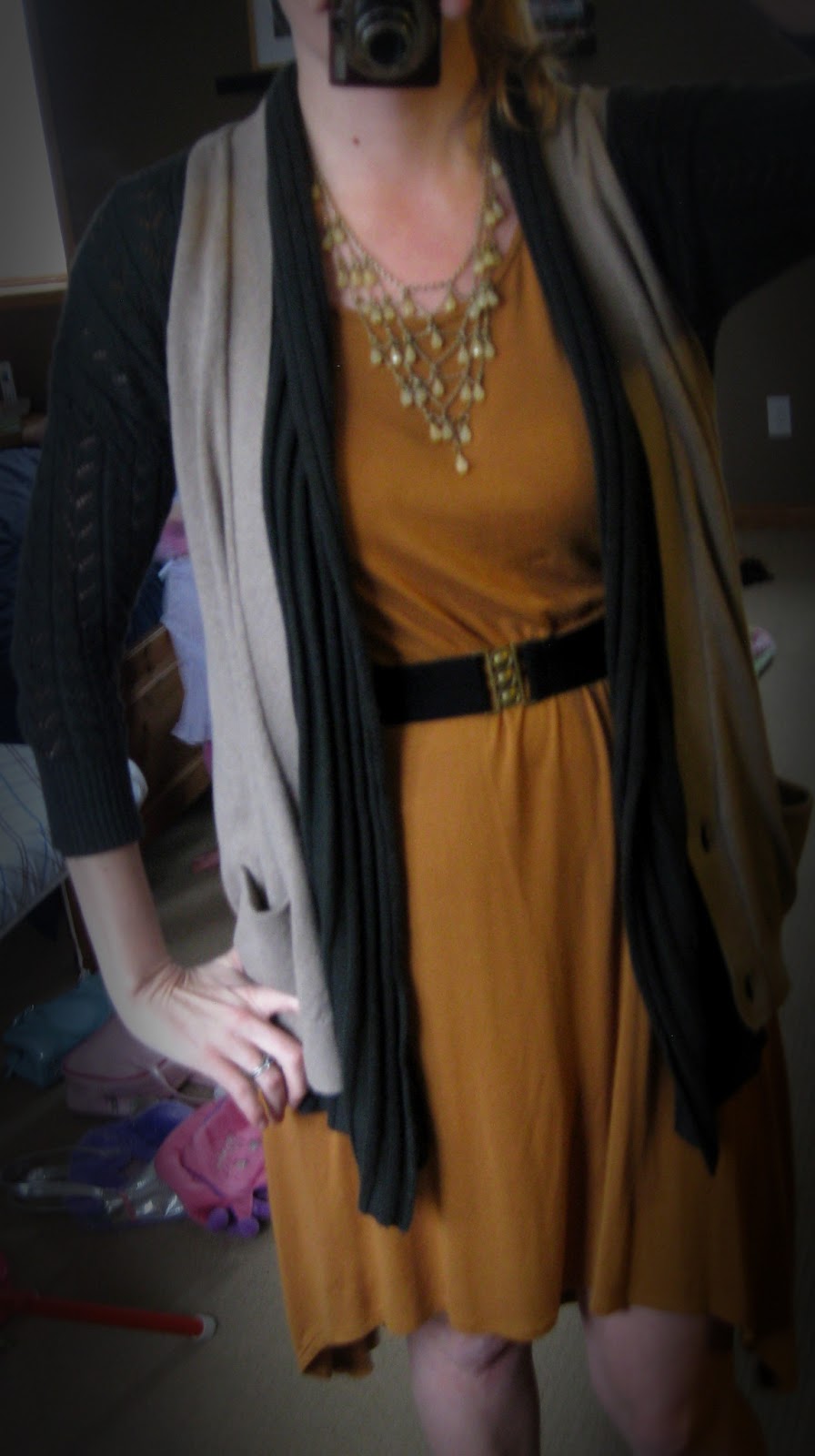 Or from the vantage of my 2-year-old who insisted on being the photographer...

I only have one cardi vest and after trying a few under-cardis, I realized I needed something with a bit of a collar.  Luckily, VV Boutique had provided the very piece I needed months ago.  I wouldn't have reached for this necklace first (which was a gift from my sister ages ago) but I was trying to mimic the model.  I ended up really liking how it wasn't so matchy matchy.  Add some tights and boots and I'm good to go!

This is one of those ensembles where it appears that nothing matches yet it looks cool, in my opinion.  Here's my take on skirt + grandpa cardi + scarf: 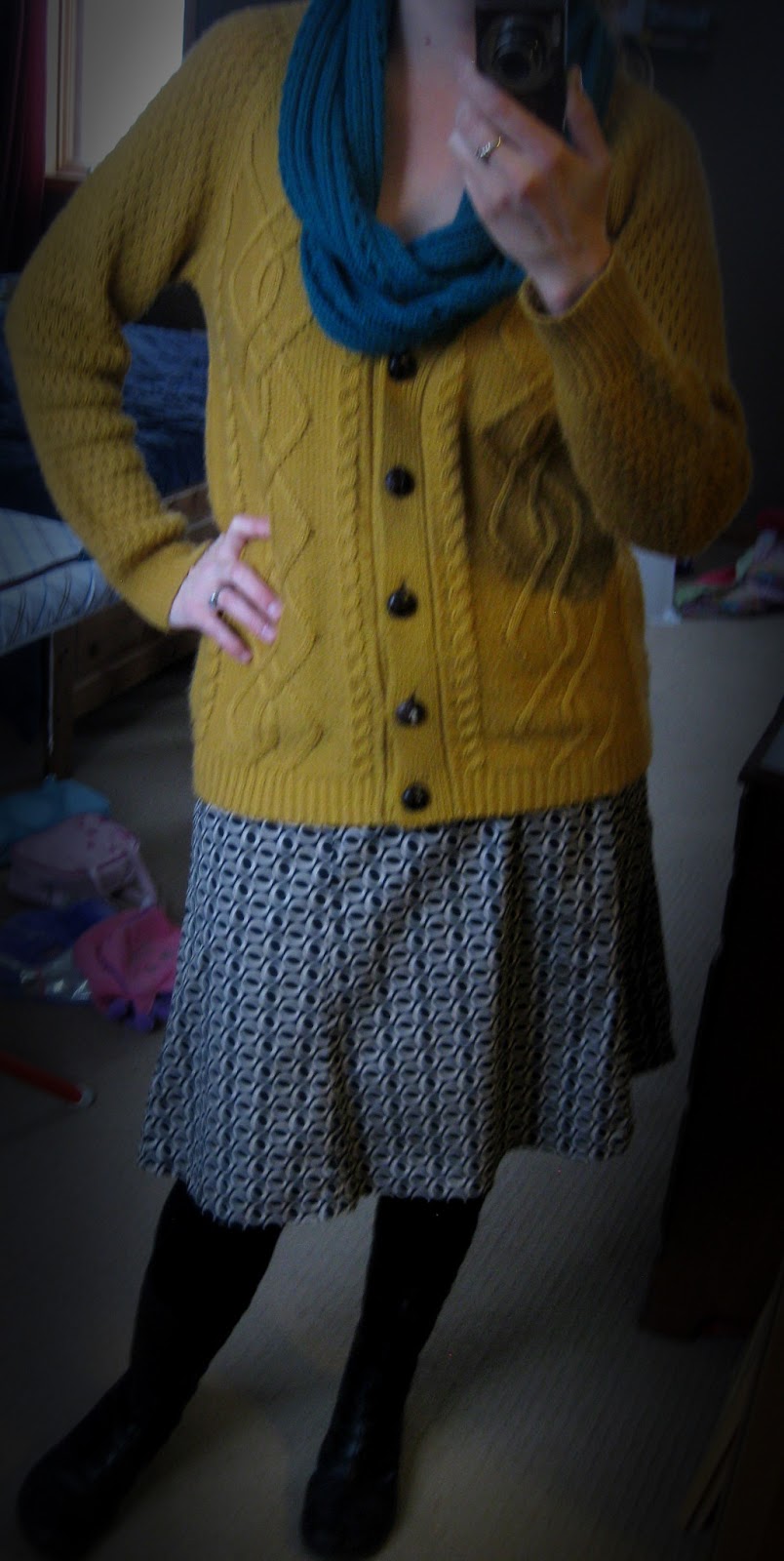 I added boots because I live in real winter, not pretty fashion winter.  I felt a bit frumpy until all the elements were in place, and then it was okay.  Not slimming, but at least more interesting than my usual fare.  I don't reach for skirts that often in real winter, though there's no reason not to when you add leggings or heavy tights.  If I had coloured tights, I might employ them here!

I would not have paired these pieces together, but I like that the necklace picks up on the plum in the jacket and I love the bold collar on the jacket.  My chevron ponte knit skirt is visiting Nana for some minor mending otherwise I would have thrown it in the mix!  Nonetheless, I was pleased with the outcome here. 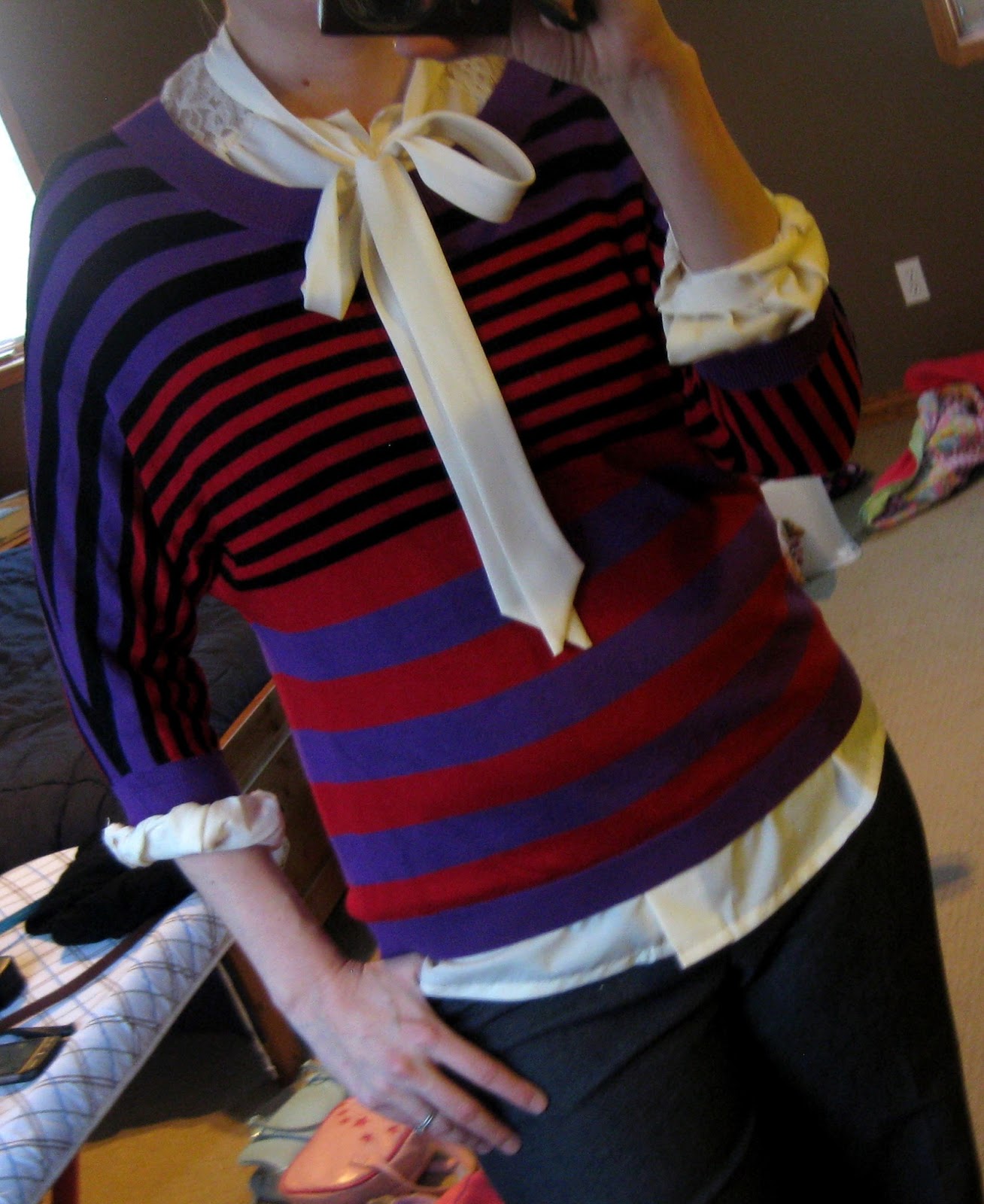 Although I appreciated the end result, I wondered if what they were trying to emphasize was the mix of polka dots and stripes, so I tried again... 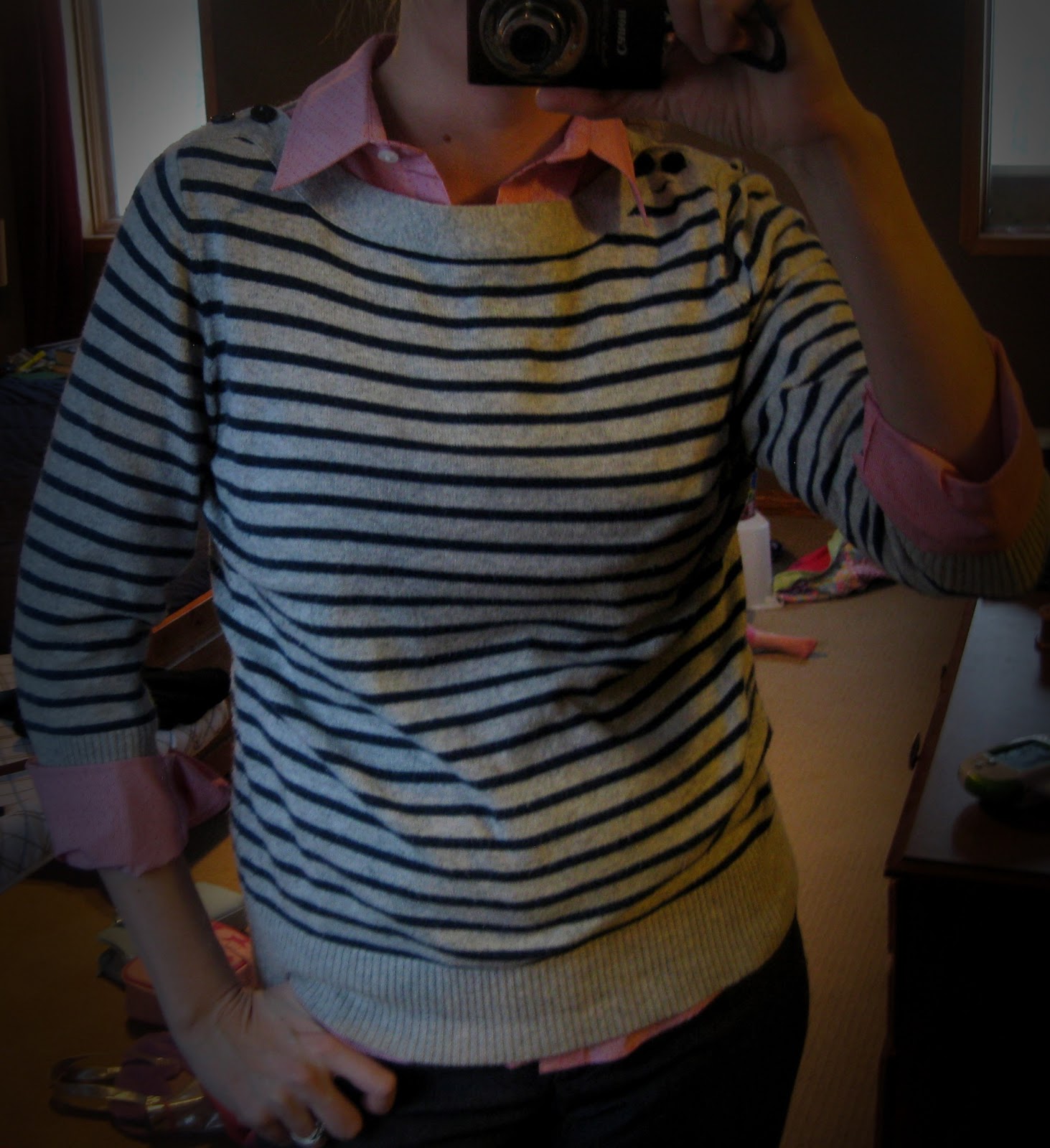 Red polka dots and blue stripes aren't a huge style stretch, but the boat neck with collared shirt was new to me.  At first it felt a bit stiff, but once I cuffed the sleeves and got everything straightened out, it was okay.  I don't have a cropped cardi and even if I did, I am skeptical it would work.  Instead a necklace or other bold accessories would be the "third." 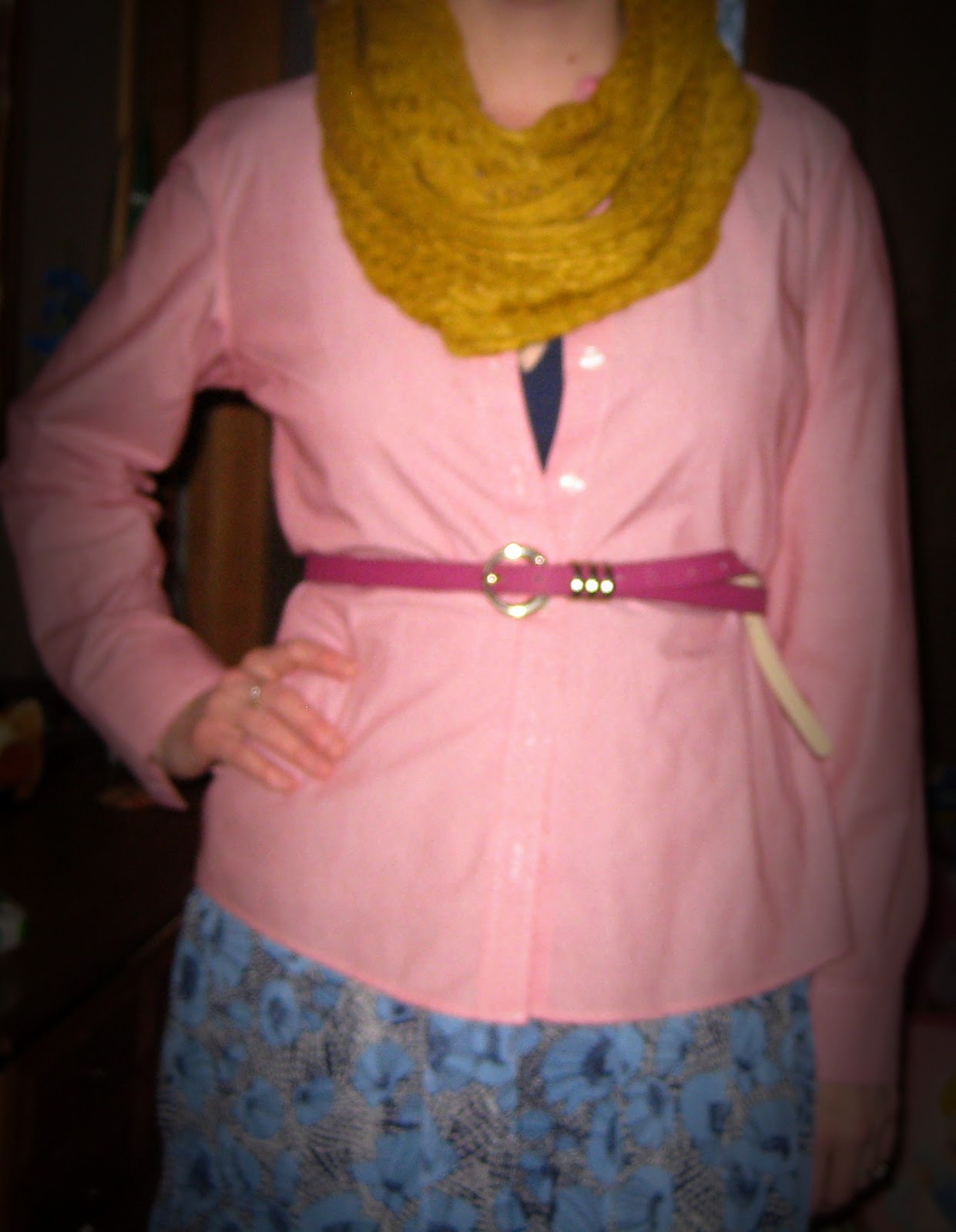 I have struggled with styling this $7 H&M dress since I bought it last summer before my VV Boutique adventure started.  It has an empire waist and flowy skiry and just didn't look right with a jacket or cardi.  I hadn't thought of adding a button-down but liked how that allowed me to "move" the waist line.  I liked mixing the colours up, then wondered if a monochromatic look might work better... 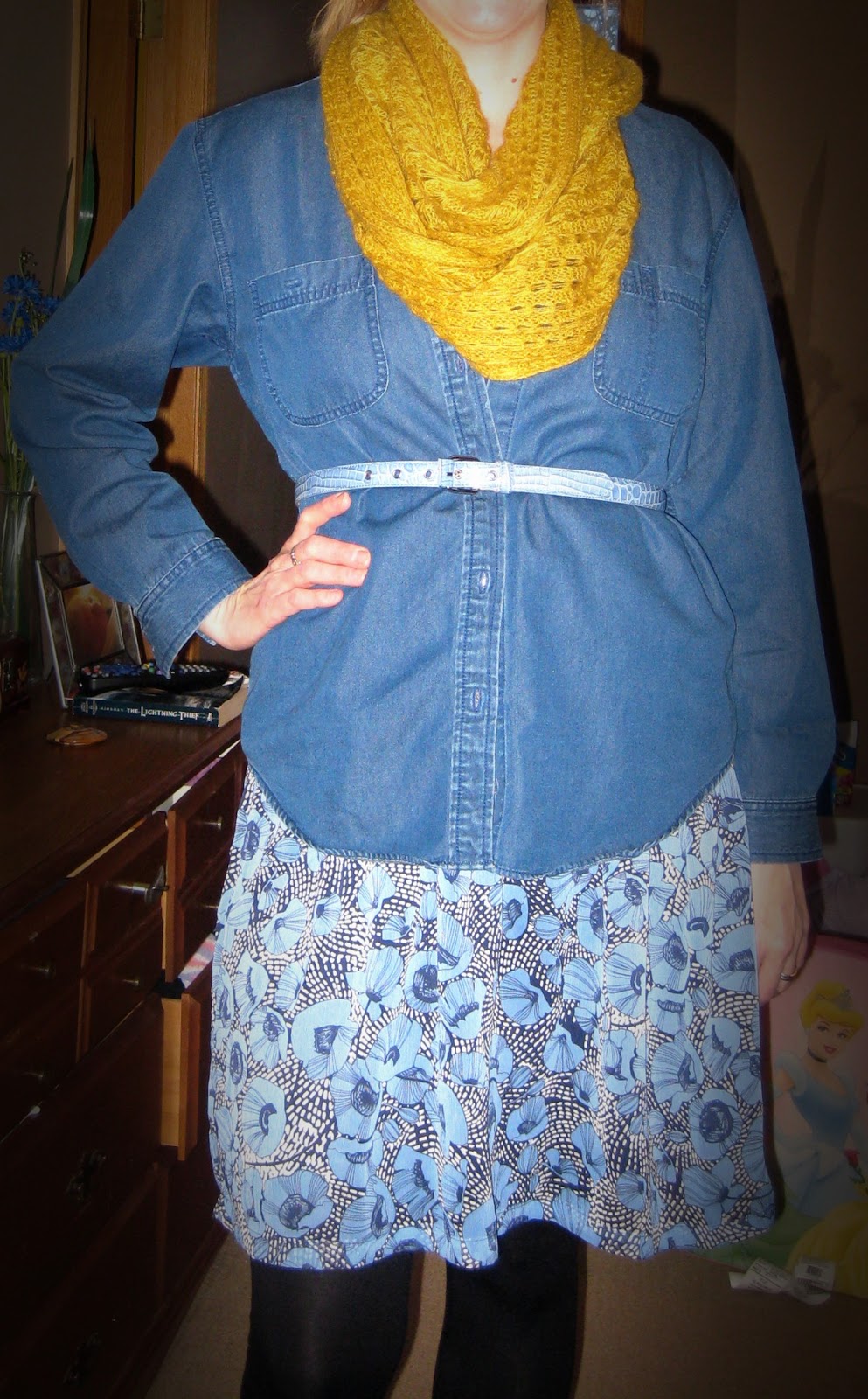 Next look: Dress + shirt underneath + outer layer + necklace that seems out of place. 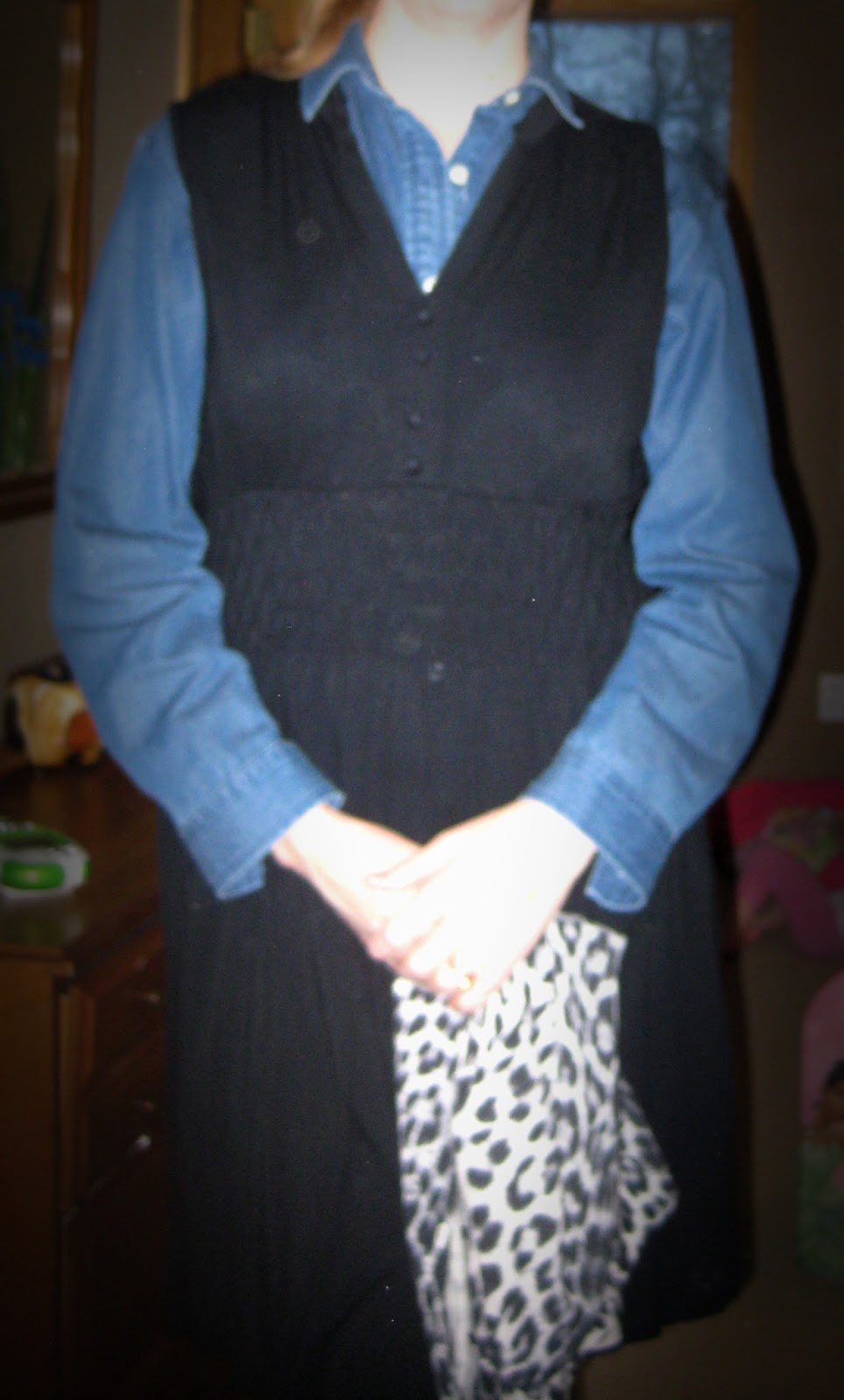 I don't have a shift-style dress as in the inspiration photo.  I typically reserve this black sleeveless dress for summer and was pleasantly surprised by how it looked with the chambray under it. 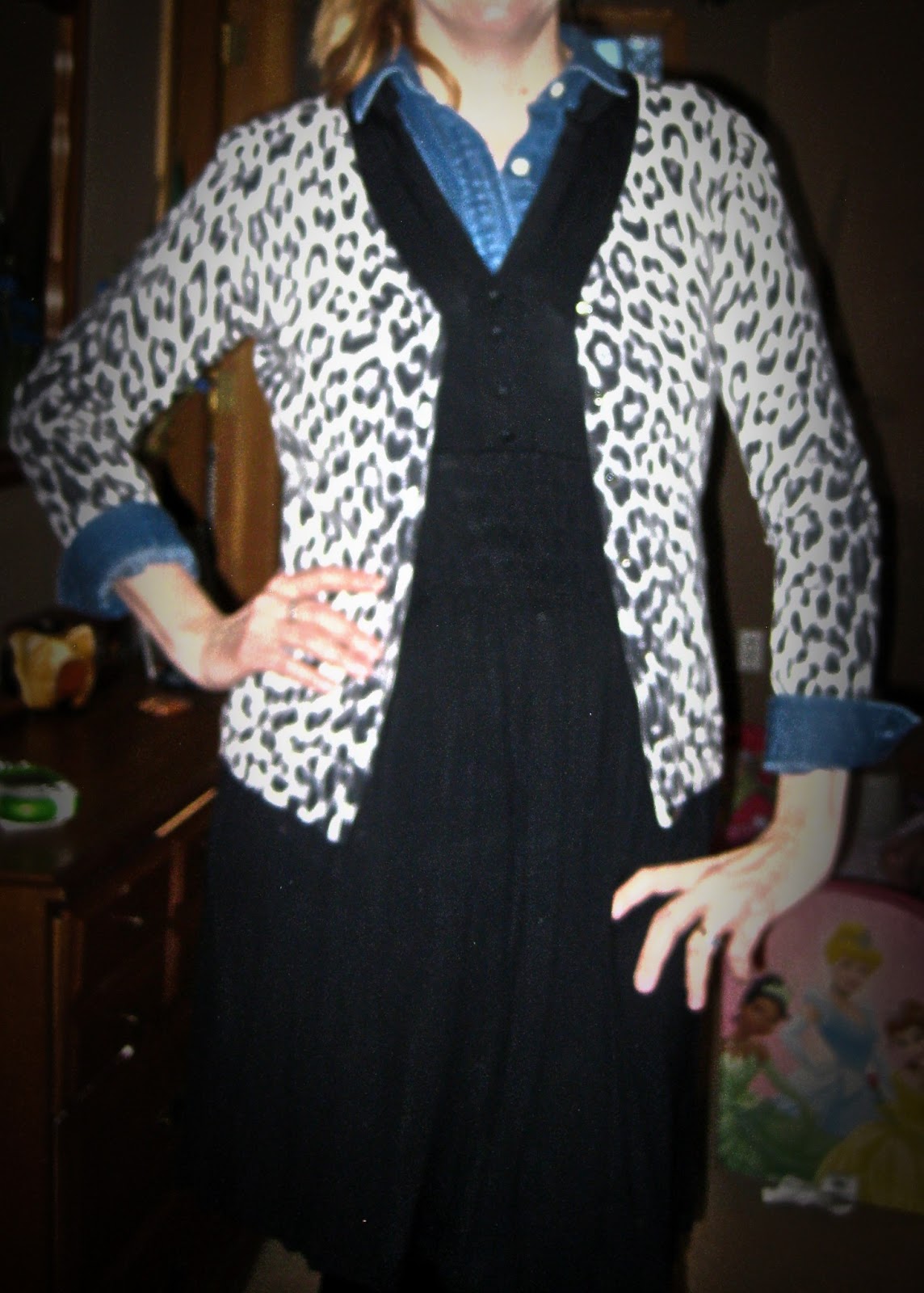 The snow leopard cardi fulfilled the "rule of three" and looked even better.  Hard to tell with the window sill taking photos on 10-second delay, which was only marginally better than my 2-year-old photographer who, after one outfit, only wanted to take photos of the floor.  I wish I would have tried a belt on the outside and will do that when I actually wear this look!  I tried a couple necklaces but felt the print and three collar lines were plenty busy without adding a busy necklace.

The waistband on this skirt reminded me of the knit hem on my ambivalent animal print tee, so this is how I replicated the outfit: 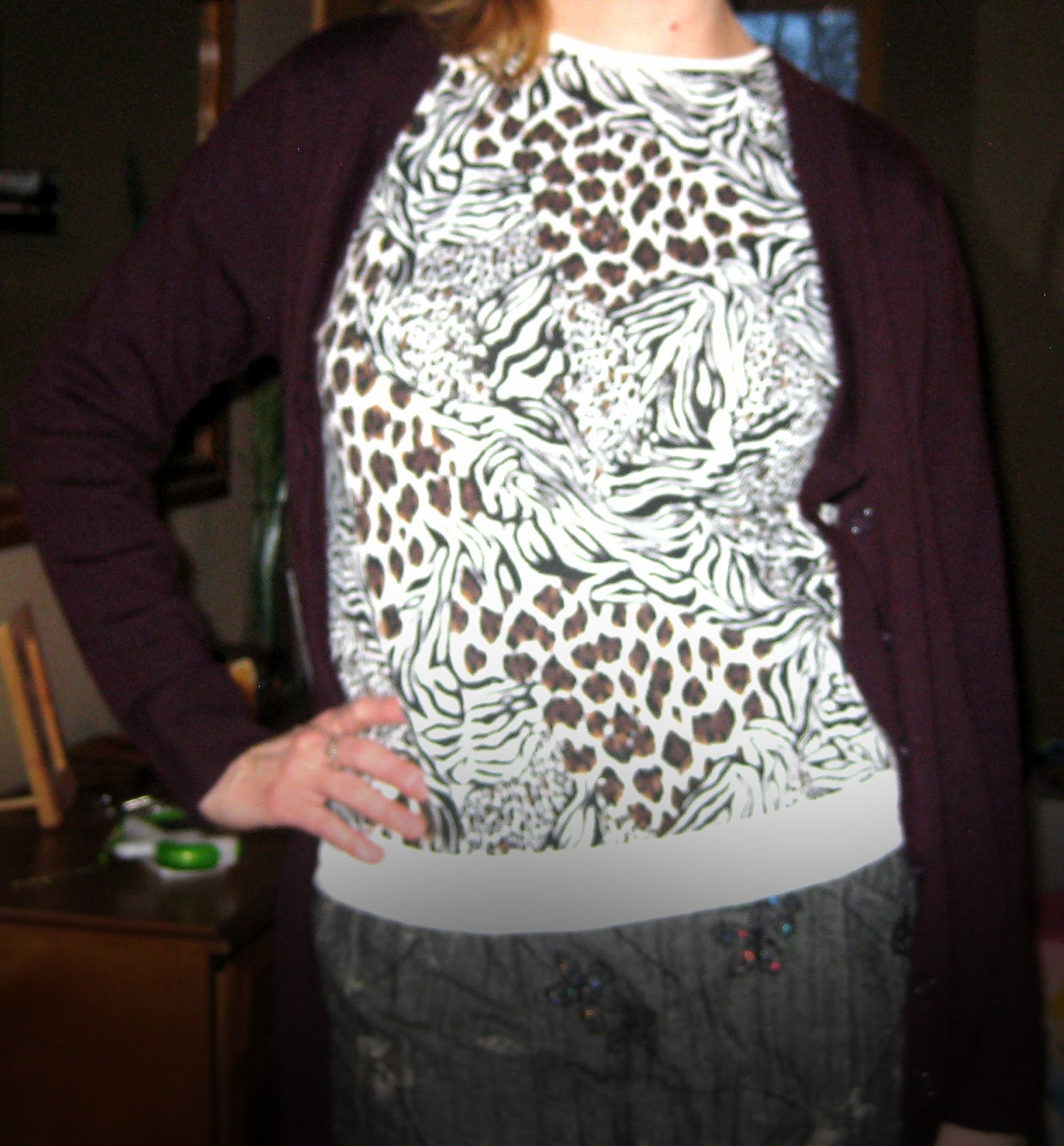 The not-exactly-matched skirt was more interesting than a straight black pairing, and rather than an outerwear piece, I chose an outer layer with ties to (loosely) echo my inspiration.

I was all prepared to write how I learned a good lesson about my style and how I don't like a mixed-up layered unmatching style vibe buuuuuttttttt now that I see the photos, I'm going to hold off on that statement!  I actually DO like the unexpected mixes; what I am not yet sure about is how comfortable they would be for real life hustle and bustle!  I need to be able to move freely and stay warm.  So.  What I will do is try some of these ensembles out and see how they fair when they're taken out of play and into real life.  Stay tuned!  One thing is for certain: without VV Boutique, there is no way I would have the range of clothes to mix and match.  My wardrobe never fails to surprise and impress me with the new and interesting ways it can be remixed!